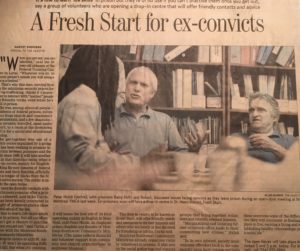 Communitas’ grassroots origins trace back to 1999 when Peter Huish, a local prison chaplain, was struck by the absence of support for both soon‑to‑be‑released prisoners and the communities to which they would be released. Those ‘inside’ were apprehensive and unprepared, particularly the Anglophone minority, for whom the dearth of programs and services was especially apparent. Outside the walls, consultation with community groups, victims and their families, and prisoners’ families revealed frustration at the lack of resources directed at successful reintegration and the rebuilding of relationships damaged by crime.

Motivated by that need, and recognizing the important role faith groups were playing in the Sud‑Ouest of Montreal where they worked, a group of everyday citizens stepped forward under the banner of Montreal Southwest Community Ministries (MSCM) to assist with the reintegration of the Anglophone prison population. Initially, their efforts were focused on high‑risk, high‑needs sexual offenders. Yet it soon became obvious that there was a real need to include also those who had offended in other ways, and to create more opportunity for the public to be regularly engaged in bridging the gap between prisons and the community.

Since then, we have expanded Our Work to include a variety of initiatives and projects, both within the community and within the local Anglophone prison populations. With a view to better reflecting our inclusive spirit, since 2015 we have continued the work under our new name, Communitas. As we continue to grow and evolve in our search for new ways to build safer, stronger communities, we invite you to help us write our next chapter!

Communitas is a truly volunteer-driven, grassroots organization. The fact that the people involved are unpaid and participate only because they care about an integrated, crime-free Montreal is at the heart of our success. Our volunteers come from a variety of backgrounds, but each of them comes to Communitas as a concerned, caring fellow citizen. We couldn’t possibly list the nearly 100 volunteers who drove our impact this past year, nor the hundreds that came before them, but without them, Communitas would not be what it is. If you want to join us as a volunteer, Get Involved.